Variety is the hallmark of NoethenButJazz. The band, led by Mark Noethen on piano and vocals, plays many styles of Jazz including Latin, Blues, New Orleans, Brazilian and Standards. The group loves to surprise audiences and get people on their feet. The band will feature Mark Noethen on piano and vocals, Lanny Webb on bass, Gil Rodriguez on drums. 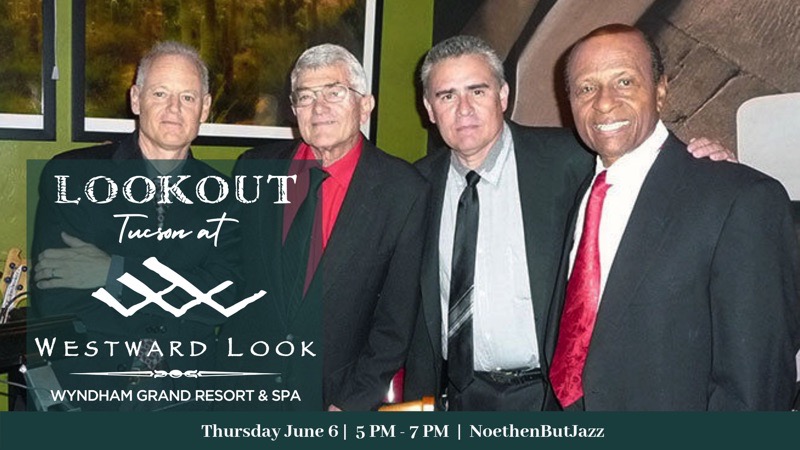 Cynthia Hilts is a jazz pianist equally talented as a vocalist, composer and bandleader. Her jazz sextet, No Fiction, was a featured performer at the 2019 Tucson Jazz Festival, and her other ensembles have performed in festivals, concerts and clubs in Tucson, New York City, and internationally. She has released four records to strong acclaim. NYC Jazz Record described her most recent record, Lyric Fury, as “never short of either surprising twists or humor, always colorful and lively” (Scott Yanow). At the keys and while leading a band, Cynthia’s interpretations of the Great American Songbook and her original songs keep audiences enchanted and captivated. 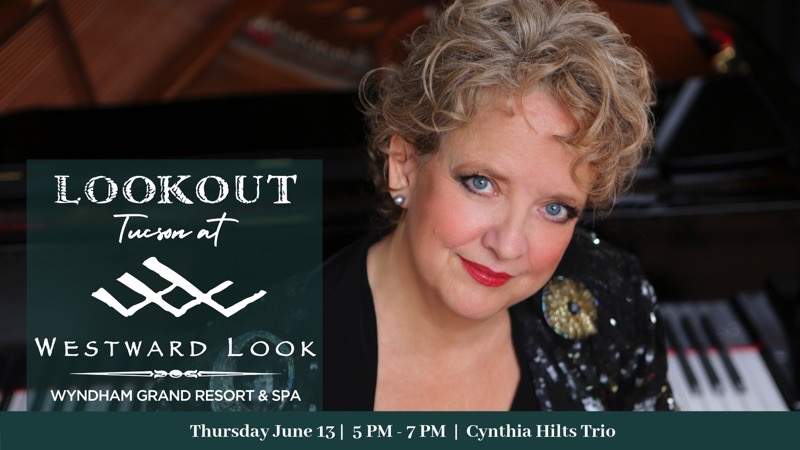 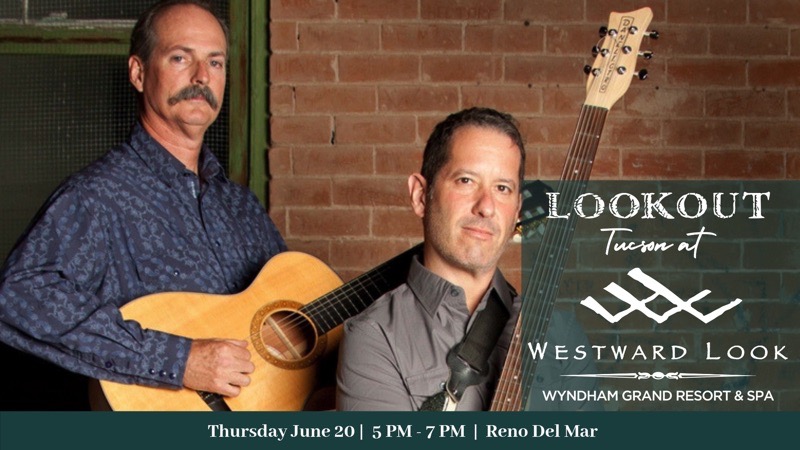 Katherine Byrnes and Angelo Versace are two of Tucson’s jazz luminaries joining together for an unforgettable night of music. A graduate of the University of Arizona School of Music, vocalist Katherine Byrnes has toured the world singing Jazz, Broadway, Rock, and Classical genres. Her projects have taken her as far as China with Art.if.act Dance Project, across Europe with Blue Note recording artist Amos Lee, and throughout the United States with her original band, Sweet Ghosts. In 2018, Katherine released an album of duets with pianist Jeff Haskell. She is joined by accomplished pianist, Angelo Versace, the University of Arizona Director of Jazz Studies. Versace has been described as “a fleet-fingered keyboard dynamo” (Lawrence Budman) and “next star on the jazz scene” (Dwayne Dolphin). Versace’s passion for performing and collaborating has led him to perform at the North Sea Jazz Festival (Netherlands), the Tucson Jazz Festival (Arizona), the New Orleans Jazz Festival (Louisiana), the Pensacola Jazz Festival (Florida), the Mellon Jazz Festival (Pittsburgh, Pennsylvania), and the Coral Gables Jazz Festival (Miami, Florida). He has had the privilege of working as a sideman with several internationally recognized artists including Khristian Dentey, Brice Winston, Troy Roberts, Dave Stryker, and Roxy Coss. 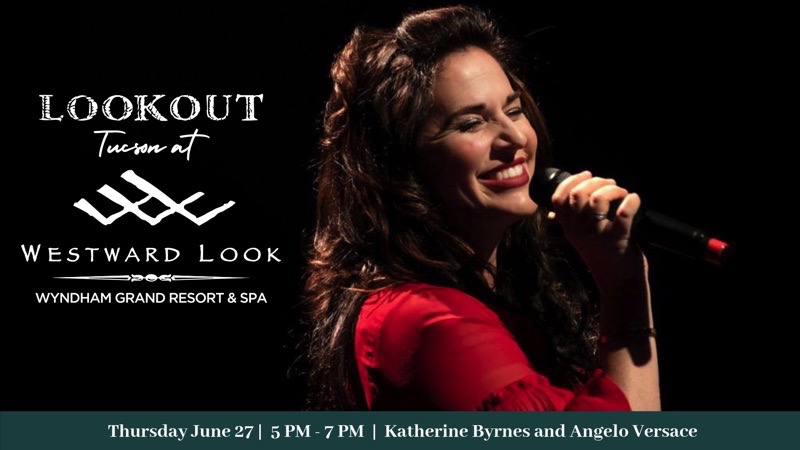 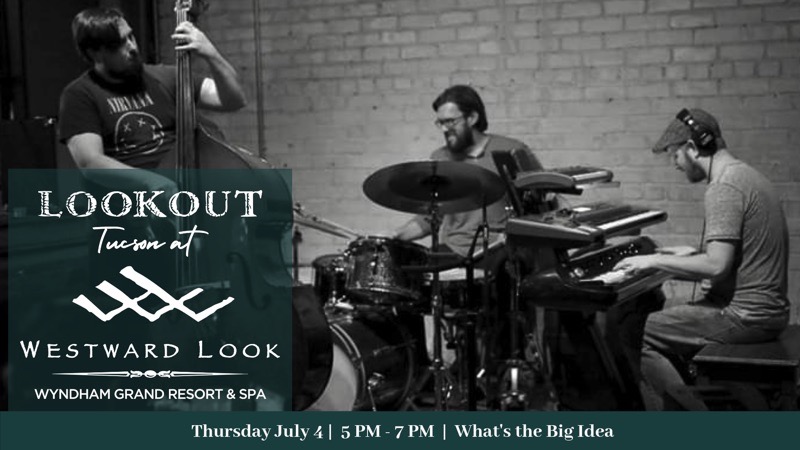 Danny Brito Trio is a compact Latin Jazz performance group that highlights the subtelties of this rhythmically heavy music. The Trio injects rhythms into jazz standards and also plays classic latin music in the Jazz Language. They have performed for the Tucson Meet Yourself Festival, Patagonia Fall Festival, Opened for CUBANISMO, and most recently performed at the Tucson Jazz Festival! The DB3 is Amilcar Guevara on Piano, Manny Brito on Bass, and Danny Brito on Hybrid Percussion. 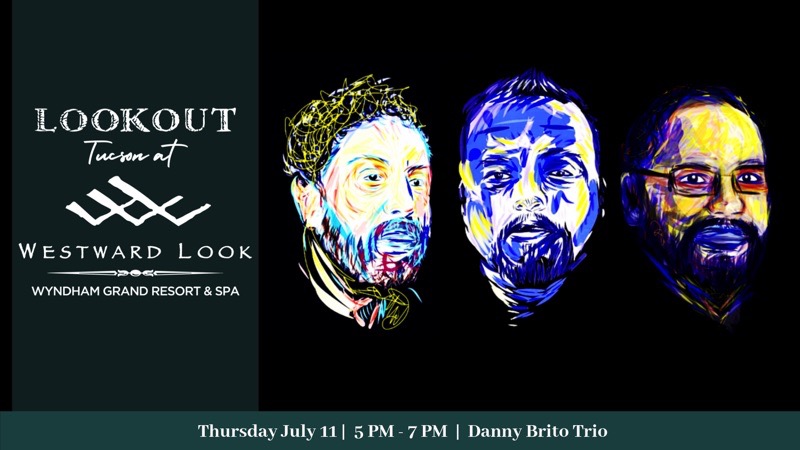 Gabriel Naïm Amor is a French born, Parisian musician who moved to Tucson, Arizona in 1997. Joined by a classic jazz ensemble, Amor performs a mix of standards, French music, and originals. An active contributor to the local jazz, pop, and composition music scene, Amor has released nine records of original music. Through the experimental avant pop group, Amor Belhom Duo, he met and recorded with Joey Burns and John Convertino of the band Calexico in the late 1990s. In 2016, Gabriel Naïm released a collaboration with John Convertino (Calexico) called “The Western Suite and Siesta Songs”, a well-received record that is an atmospheric love letter of sorts to the Southwest. His newest album, “Moments Before”, was released in 2018 and melds his jazz and desert-rock sensibilities with a unique and unmistakable voice.  Gabriel Naïm Amor also composes film/short film soundtracks between recording his albums. He completed the score for the PBS documentary film “Precious Knowledge” which won two awards at the San Diego and Los Angeles Latino Film Festival. 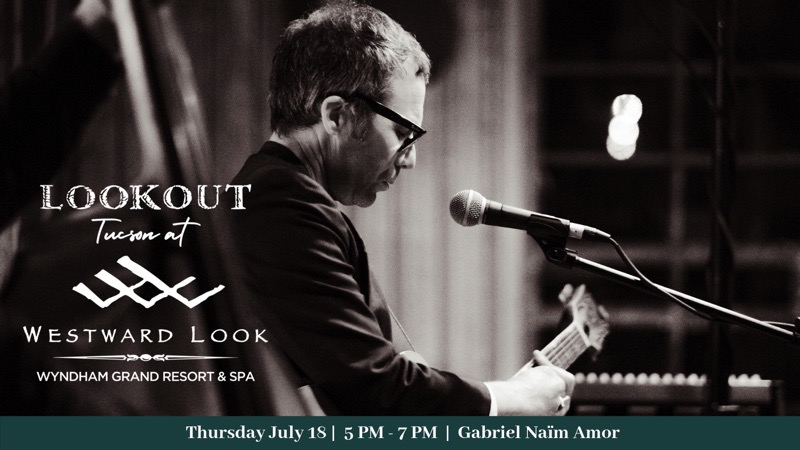 Larry Redhouse Trio (Piano Trio)
Pianist and composer Larry Redhouse leads a world class ensemble that incorporates straight-ahead jazz, latin, funk and reggae influences in its exciting repertoire. Larry Redhouse has performed in prestigious venues around the world, including the Grenoble Jazz Festival, the Smithsonian Museum and Kennedy Center Jazz Club, both in Washington, D.C. He has opened for jazz greats Chick Corea and Terrance Blanchard, and backed such popular artists as Rick Braun and Euge Groove. Larry has released over four CDs, including “Live at the Westward Look”, “Naomi’s Dance”, and “The Great Mystery”. 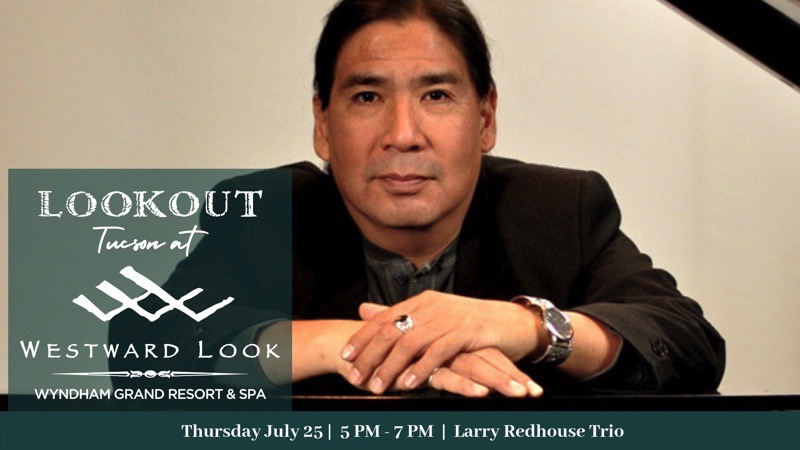 Nossa Bossa Nova performs authentic Brazilian Bossa Nova music sung in Portuguese. The duo, consisting of Theresa Levy (voice) and Mike Levy (piano/guitar), has a flair and passion in their Brazilian music that is impossible to ignore. Theresa is a second generation Italian American, born in Los Angeles. She’s fluent in several languages, including Portuguese, Italian, Spanish, and French and her fluency brings an intimacy and artistry to the lyrics of the classic Bossa Nova she’s become known for. Her musical partner, Mike, has a career that spans the world of music production. Mike is an accomplished bassist (acoustic and electric), pianist, guitarist, vocalist, and drummer. In the studio, Mike has been responsible for numerous projects ranging from producing rock and pop albums to composing music for film and television. A professional musician since the age of 15, Mike attended the University of South Florida and Berklee College of Music before leaving to tour with the Maynard Ferguson Big Bop Nouveau Band in 1993 at the age of 19. He landed in NYC where he spent his time playing with various funk, R&B, jazz, and folk artists. Theresa and Mike have been performing as Nossa Bossa Nova since 2002. 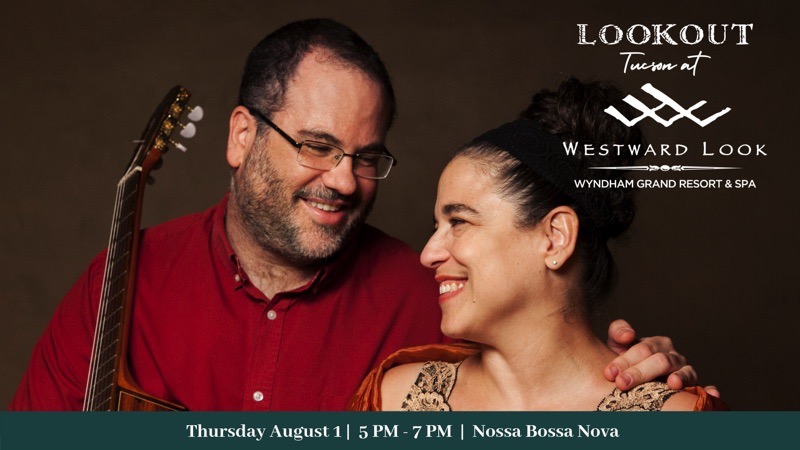 Jazz, Blues, the American Songbook and pop tunes are on tap when “Sly Man and Sheryl Ann” perform. Their newest album is called “Sheryl Ann Starlight Invitation” and features the signature soaring jazz vocals of Sheryl Ann McKinley and the shimmering piano playing of Daniel “Sly” Slipetsky. Piano maestro Daniel “Sly” Slipetsky began playing jazz and learning to improvise during his high school years. He honed his skills on both piano and tuba at three universities in Delaware and Arizona. Here in Tucson, he regularly performs in a variety of jazz settings.  Teaming up with Sheryl Ann, he has also explored musical styles outside of jazz, and occasionally dabbles in singing as well. Sheryl Ann McKinley describes her relationship to music and singing in her early years as a “hidden gift” 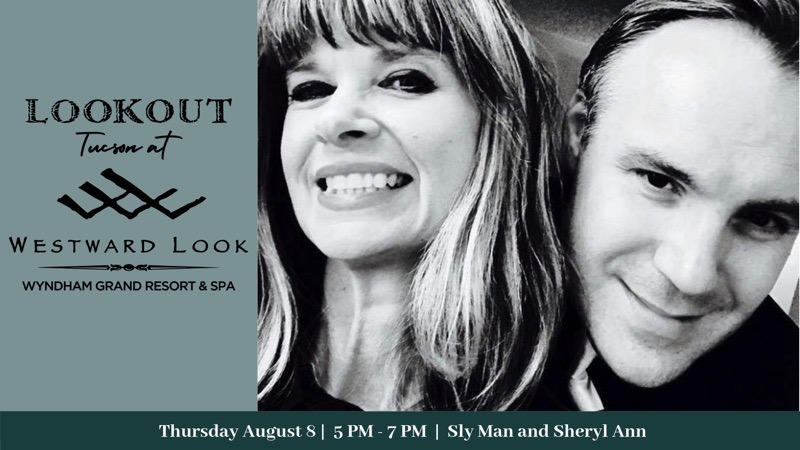 Peña, Carruthers, and Lund are an exciting new addition to the Tucson Jazz community. All in-demand players and recording artists in their own right, the trio features Chris Peña on keys, Josh Carruthers on drums, and Thøger Lund on upright bass. After getting a degree in jazz performance at ASU, pianist Chris Peña, has become a frequent collaborator in his hometown of Tucson sharing the stage frequently with locals cats such as Brice Winston, Jason Cardner, Mike Moynihan, Crystal Stark and Robin Bessier. Drummer Joshua Carruthers, born and raised in Bridgeport Connecticut, is a relative newcomer to the Tucson area. Back East, he was active on the gigging scene, playing throughout Connecticut and New York City in a variety of genres including jazz, experimental music, Rock/Pop, and modern R&B and Hip Hop. Rounding out the trio is the Danish born Bassist and Cellist Thøger Lund, who moved to Tucson over a decade ago after joining Arizona rock band Giant Sand. Lund performs regularly around town playing many different styles of music including jazz, Latin, rock, and Americana. 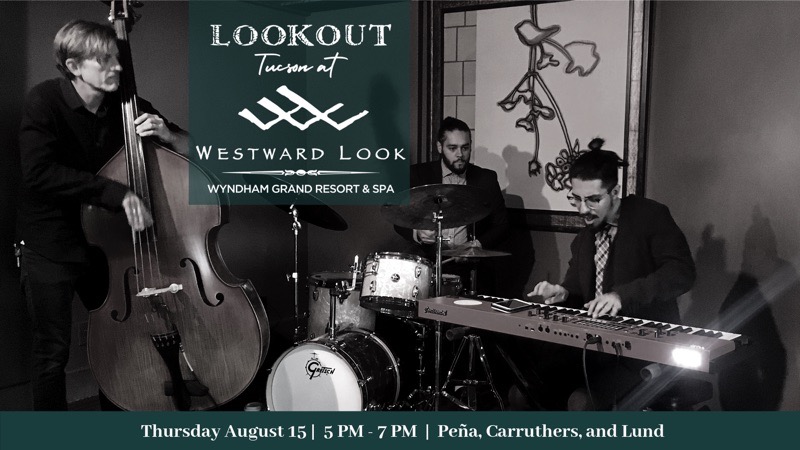 Phoenix native Holly Pyle is buzzing the valley and other corners of the US with her latest concoction of disparate music influences. Known as an intuitive vocalist with an ability to inhabit nearly any style of music, Holly started out as an opera major at Northern Arizona University, quickly shifting to complete studies in jazz and psychology. Since diving into a full-time music career in late 2014, Holly has cultivated her own progressive soul-pop sound, releasing two albums and giving over 1000 performances, both locally and throughout the US. In addition to moonlighting with several acts from hip-hop to country to jazz, Holly frequently performs as a solo a-cappella act using electronic looping to sample and recombine her voice into an ever-changing choir of Hollys. Her original psych-soul project House of Stairs released a full-length album in Fall of 2018. She will be fronting a power house jazz ensemble performing familiar and original material. 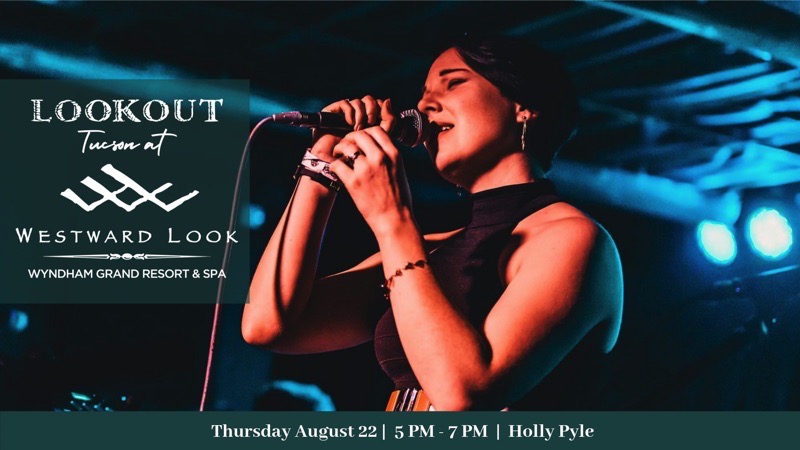 International touring artists Diane Van Deurzen & Lisa Otey are a dynamic duo, a perfect blend of hot jazz, sultry blues and boogie-woogie. They take their act to festivals, clubs and theatres around the world and are known for creating an atmosphere of intimacy with their humor and joyful interactions with the audience. Recent performances include the Thredbo Blues Festival in Australia; Fenn Valley Vineyards and Box Factory for the Arts, Michigan; Yardbird Suite in Edmonton, Alberta, Canada; Blues in Bisbee and Tucson Folk Festivals, Arizona; Yoshi’s in California; and the Lucerne Festival in Switzerland. Diane Van Deurzen and Lisa Otey have been inducted into the Arizona Blues Hall of Fame. Lisa has also been inducted into the Tucson Music Hall of Fame and appeared on the Grammy-nominated CD, “Ladies Man” with Pinetop Perkins.