THE HOT CLUB OF TUCSON

The Hot Club of Tucson (HCOT) was formed in 2004 by guitarist Allin Kibben (who has since left the group) to play the Tucson Folk Fest. Originally a 5-piece with rhythm guitar and clarinet, the group is now a trio consisting of violin, guitar and acoustic bass. HCOT is a gypsy jazz group that plays the charming and virtuosic jazz music of Django Reinhardt and Stephane Grappelli. Because of our American traditional jazz influences, however, we like to break out of the usually-defined roles and interact with each other more than is common in the French jazz style.

In 2013, HCOT released their 1st cd, Hot Club of Tucson LIVE!, a collection of the best recordings from three live concerts. HCOTs’ main gig for the last 5 years has been a weekly brunch at Hotel Congress on Sundays from 10:30 am-1:30 pm. 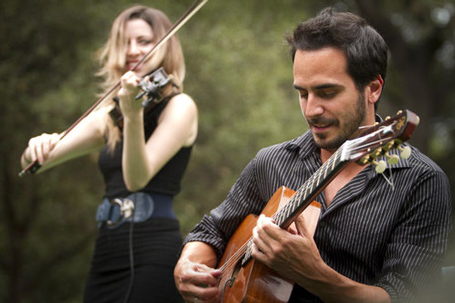 The all-acoustic Gonzalo Bergara Quartet plays a modern variant of 1930’s Django Reinhardt-inspired gypsy jazz. Composer and lead guitarist Gonzalo Bergara mixes a cascade of arpeggios with the sounds of Paris and his native Argentina. His first CD, Porteña Soledad, was Editor’s Pick in Guitar Player Magazine, and Vintage Guitar Magazine called it a “masterpiece.”

The Gonzalo Bergara Quartet consists of Gonzalo Bergara on lead guitar, Jeffrey Radaich on rhythm guitar, Leah Zeger on violin, and Brian Netzley on upright bass. The music is heavily influenced by Django Reinhardt and the Hot Club of France, as well as the traditional jazz and music of Bergara’s true home, Buenos Aires. “Gonzalo Bergara’s music exists in a way that very little music does. He has lavished such care on every phrase, built each arrangement with such lapidary precision and pared away anything extraneous, the music becomes sculpture. It has weight, density, gravity. This is serious… and deeply moving.

“GertieNtheT.O.Boyz” is one of the premiere ‘Waila’ Bands playing a mix of traditional and new Waila music. All band members are also members of the Tohono O’odham Nation which is located in Southwestern and Central Arizona. The name “Tohono O’odham” , abbreviated to “T.O.” in our name, means “Desert People” in our native language, and our reservation is substantial, equaling the size of the State of Connecticut.

The Band consists of an Accordion, Saxophone, Violin, Bass, Bajo Sexto, and Drums. The term “Waila” translates into the word “Dance” in our native language, and is the most popular social dance music on the Tohono O’odham Nation. Waila music includes several varieties of polkas, chote’s (two-steps), Cumbias, Mazurka, and also Kwalya which is a type of square dance which is danced to at festivities of all occasions. GertieNtheT.O.Boyz has been in existence for approximately 10 years, sharing our music with people on and off the reservation, with other ethnic communities and celebrations, and at different events across the country. Gertrude Lopez, better known as Gertie, is the only female band leader on the Tohono O’odham Nation.

Gertie Lopez is an ambassador for the Waila Music. She currently enjoys teaching music and singing on the Tohono O’odham reservation for the people from toddlers to Elders. Gertie also enjoys presenting to the youth on how to be a healthy musician.

Their multicultural musical heritage has rightly led Jaleo into the top leading performers in Phoenix, Arizona. With meritorious achievable performances, Jaleo has musically reproduced impressionistic geographical cadences in their work, offering Afro Cuban, Puerto Rican and Colombian rhythmical inspiration. Their Multicultural awareness is a musical interpretation of past and present joy.

The Tucson Jazz Collective (TJC), formerly Park Avenue Jazz Orchestra, is a newly formed, Tucson-based, professional jazz ensemble. The group comprises local and transplant musicians representing the best Tucson has to offer. TJC aims to promote its agenda of world-class quality music through a series of performances and concerts in and around southern Arizona, and will mark it’s first year of existence with a recording at the Jeff Haskell Recording Studio at the University of Arizona in August of 2018.

The UA Studio Jazz Ensemble is directed by Angelo Versace

The Arizona Jazz Collective brings together four highly acclaimed artists who have performed worldwide with a who’s who of jazz. The band’s live performances embrace jazz’ past, present, and future, with a great chemistry and an adventurous, hard-swinging style. Saxophonist Brice Winston (Terence Blanchard, Herbie Hancock, Ellis Marsalis), pianist Angelo Versace (Warren Wolf, Marcus Printup, Slide Hampton), and the swinging rhythm team of veterans Tom Wakeling (Lee Konitz, James Moody, Mel Torme), & Dom Moio (Clark Terry, Herb Ellis, Ahmad Jamal) join forces only a handful of times each year to perform as the Arizona Jazz Collective. Their time together on the bandstand is always a musical highlight of the year, both for them and for their audiences!

The Nelson Riddle Archive at the University of Arizona holds a treasure of arrangements by one of America’s preeminent figures in popular music of the 1950s and 60s. The Arizona Symphony Orchestra and UA Studio Jazz Ensemble join forces and welcome UA alumna vocalist Katherine Byrnes for an elegant evening of arrangements originally written for Ella Fitzgerald, Nat King Cole and Linda Ronstadt. Big band and symphonic orchestra unite in the great finale, Riddle’s “Adam and Eve” ballet from the 1960 film “Can-Can.”