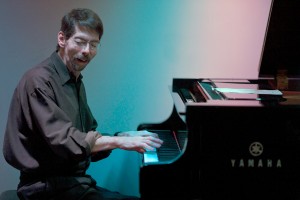 Pianist Fred Hersch, who is approaching legendary status in the jazz world for his imaginative prowess—from reinventing jazz standards to creating originals destined to be standards—is coming to Tucson for a very special concert sponsored by the Tucson Jazz Society and the Southern Arizona AIDS Foundation. The concert will be held on Wed., Nov. 13 at 7 p.m. at the Temple of Music and Art, 330 S. Scott.  The performance is part of a tour by the Western Jazz Presenters Network and funded through a generous grant from the National Endowment for the Arts. Hersch will be accompanied by his long-standing bassist and drummer, John Hébert and Eric McPherson. This will be Hersch’s third appearance in Tucson under the auspices of the Tucson Jazz Society.

Pianist and composer Fred Hersch has been called a “one of the small handful of brilliant musicians of his generation” by Downbeat and has earned a place among the foremost jazz artists in the world today. From the late 70s onward as a sideman to jazz legends including Joe Henderson, Art Farmer and Stan Getz, he has solidified a reputation as a versatile master of jazz piano, as well as a relentlessly probing composer and conceptualist.

He is widely recognized for his ability to steadfastly create a unique body of original works while reinventing the standard jazz repertoire – investing time-tested classics with keen insight, fresh ideas and extraordinary technique. Whether unaccompanied, in duo, working with trios and quintets, Hersch has explored the jazz tradition to its fullest even as he opens new and undiscovered doors. Hersch’s numerous accomplishments include a 2003 Guggenheim Memorial Fellowship for composition, two Grammy® nominations for Best Jazz Instrumental Performance and a Grammy® nomination for Best Instrumental Composition. He has appeared on over one hundred recordings, including more than two-dozen albums as bandleader/solo pianist.

Hersch has acted as a passionate spokesman and fund-raiser for AIDS services and education agencies since 1993. He has produced and performed on four benefit recordings and at numerous concerts for the charities Classical Action: Performing Arts Against AIDS and Broadway Cares/Equity Fights AIDS that have raised over $250,000 to date.

Make a reservation for dinner before the show at our sponsor, Downtown Kitchen and Cocktails

Made possible, in part, by a grant from the Western Jazz Presenters Network and the National Endowment for the Arts, presented in cooperation with the Southern Arizona AIDS Foundation.

The Tucson Jazz Society (TJS) Annual Board Meeting is scheduled for Tuesday August 12, 2014

This meeting is open to Tucson Jazz Society Members ONLY. We will elect NEW BOARD positions to include President, Vice President, Education Committee Chair, and Membership Chair. If you are not a member, please consider joining us for great discounts on concerts and to support quality live jazz in Tucson. Become a member online.

The TJS is a non-profit 501(c)3, and volunteers make up the work that we do. Along with elected positions TJS is always looking to add new board members & volunteers to help with Marketing for Sponsorships, Raffles, Silent Auctions & Other Fundraising Events, and Event Organization. 2014 has been a success so far and the Tucson Jazz Society is actively working on our 8th Annual Series Concerts. Our first concert on July 5th, starring The Larry Redhouse Trio, was a hit.

We are excited for our next concert August 30th featuring Genevieve & the LP’s + Loran Cox, with following concert dates to showcase The George Howard Band, Dmitri Matheny, and David Bach. This is an outstanding lineup of award winning and new artists bringing their irresistible and unique musical talents to Tucson.
The TJS would appreciate your help for our future calendar of events and we ask that you volunteer your talents and energy to the TJS.

Currently the TJS has a great group of people that make up a strong board. This wonderful group of committed people are from diverse backgrounds and work experiences. What a great way to meet new people and promote the arts for our youth and community. For your love of Jazz become a part of the Tucson Jazz Society. Please contact Mark Slivinski, President, with your interest at president@tucsonjazz.org.